Hello, my wonderlandians! How is your weekend going? Let me know.

This book was the perfect continuation of the first book. Sadly since this is the second book in the series I don’t want to get too much into detail about the plot. Everything about this book you really need to go into it without knowing much because every chapter is a spoiler. So I think for this review I am going to be mainly talking about my feelings towards the book and just giving you a general overview of what I thought. my love for the two main characters Lucy and Marcus just grow exponentially in this book. in both of their eye, they can do no wrong and they’re both quick to forgive each other when one of them does something stupid. Now it might be the deeper the connection that they have or it’s just that they’re hopelessly in love and they’re still in the honeymoon phase of a relationship. who really knows.

Once again we’ve got to cover change. I really enjoy this cover it’s pretty we see more of the girls face this time the color scheme is still blue. I still don’t understand what this cover has to do with the story. The title is severed hearts. The look on that girls face does not make me think that she is hurting in any way shape or form.It is a really pretty cover but I honestly do not feel that it fits this story.

Now we’ve got the same color scheme going here it is blue but it has that same mysterious dark edges as the cover change for severed wings. This really speaks of mystery and it really highlights girl’s face. This time she’s kind of facing away from us she’s got her hair pulled back over her face I don’t know what his about these covers but I am in love with them.  The photography, the lighting the overall just composition of this cover is amazing. This is something I wish I could design. Not saying that I couldn’t just I don’t have the skill level of this person.

Thank you all for joining me here in our wonderland. Don’t forget to feed the unicorns on your way out.

Hello, my wonderlandians! Welcome to the weekend. What are you guys doing on the second to last day of the year? Let me know.

Quick Disclaimer – This following book I am about to review was at the beginning of the year sent to me in exchange for an honest review that I was to put up on amazon earlier this year and I did that. I was in no way obligated to put up this review. I have just recently reread the book and I have further thoughts on the book. Plus there was a cover change. This is an honest review…plus I will also be giving some back round about my life. This could be a long review.

So to kick things off with this review I really want to start off with the covers. 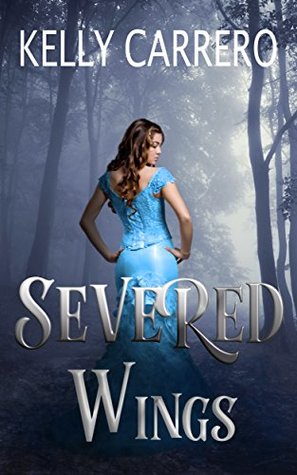 In all honesty, I like this cover. This is the original cover. It’s pretty. There is a pretty girl in a blue dress, but this is a cover we have seen a 100 times over. There is no connection to the contents of the book in this cover. I could not tell you what this book was about based on this cover alone. It is pretty and the person who did design the cover did a really good job. 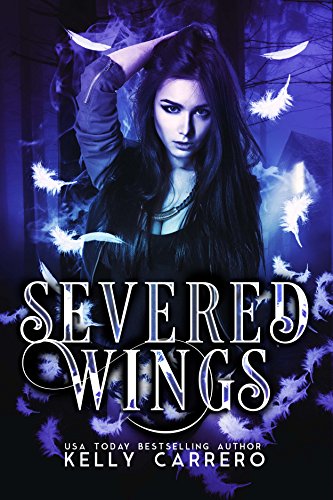 Now when I look at the second cover I am in awe of it. You can really get a sense of the story at least in my opinion from just a cover image. There are white feathers floating around the girl who’s kind of off center in the cover or at least that’s what it looks like from the position that she’s in. Now the 2 colors that are going on in this image with the rich blacks and varying different degrees of purples and if I’m not mistaken right in the center of the photo there is a blue popping out from behind her kind of highlighting the midsection of her. There is a lot more Dimension and movement in this cover and I feel like you’re I automatically gets drawn to a girl and then you can move around with the cover. Hopefully, I’m making sense. This cover is absolutely breathtaking and when I’m comparing the first cover to the second cover I would definitely reach for the second cover if I had no idea who Kelly Carerro was. Everything in this cover is perfection. Also, it looks like they did a font change in the covers as well and I must say I definitely prefer the second font to the first font. Overall, I really just prefer the second cover.

“Normal” is something I could only dream of being called. “Mental” or “screwed up” is what I’m labeled. But actually feeling other people’s pain does that to a girl. I’m not an empath. I’m crazy! That is until I meet one guy who makes it all go away.

The problem is, he’s even crazier than me. At least I thought that in the beginning before the coincidences became undeniable. But, if what he was saying were true, he would not only become my savior, he would also open my eyes to a world filled with angels, demons, witches, and an ancient curse that I’m caught smack bang in the middle of.

Either way, I already knew he’d be the death of me.

This book to me felt really different than anything Kelly is ever written before. She’s got two other series out and the only other series I’ve read from her is her Evolution series. I devoured those books in 3 days when it was a trilogy. She then added on I want to say 3 more books and I still need to get to those. I have a very deep connection to the first half of this book. I think this is why it is in my top 10 favourite series. the first half of this book takes place at a rehab center that is a working Ranch. now the reason that I feel so connected to this setting and to our main character Lucy is because when I was about 19 years old I was going through a very hard time in my life. I have obsessive-compulsive disorder and at that time it was really bad. So I discussed with my mother going into a long-term Treatment Center. the treatment center that I had looked at was on a working Ranch. so the setting that this Ranch took place in really reminded me of my time there. Unfortunately, the ranch was really expensive and I wasn’t able to go. this book gave me that experience and away.

I really want to talk about our main character Lucy. she grew up knowing that there was something a little off about her. She never really felt like she belonged in her family. her birth name that her mother gave her was Zoe and if I’m remembering correctly she wanted at a very young age to be called Lucy. She never really understood why this name was hers. it just was. in the synopsis, Kelly uses terms Not normal, mental, and screwed up. In Lucy’s mind, that’s what she was. She genuinely felt like she was crazy because there is an element of otherworldliness to this book. Our main character can feel other people’s emotions,  because of this it drives her to try to commit suicide on multiple different occasions. I want to process this right now that if suicide or any kind of mental illness is a trigger for you this is probably not the book for you. it does though in the second half of the book get away from the mental illness and the rehab center that Lucy is at for the first half of the book.

While Lucy is at the rehab center she meets some people who she feels normal around. when the emotions start getting too much for her the owner of the ranch John lets her ride a horse to kind of get away from all of the emotions and give her a break. then we meet our love interest Marcus.  there is just something about him that Lucy can’t shake. now we really don’t find too much about Marcus in this book he’s kind of withdrawn we find out a little bit but not much.

Another thing that I really liked about this was the fact that to really get a sense of this book you need to read it. There is no information given we find out all the information with Lucy. If she’s clueless were Clueless. I honestly could not have predicted how this book ended. so every twist and turn in this book is a surprise and a shock.

The one thing Kelly is really good at is creating characters that you feel a real deep connection to. and I feel with about maybe 90% of the characters I want to get to know them I feel this connection with them and it drives me to want to read more of the book to discover who they are. I want to know how they will develop and honestly I want to find out what the Mystery is.

I know this review is a little bit different in format to my other reviews I will be getting back to my old format but  I have a feeling for this book series it’s going to have to be this way.

What did you guys think of this review? Let me know.

Thank you all for joining me. Don’t forget to feed the unicorns on your way out.